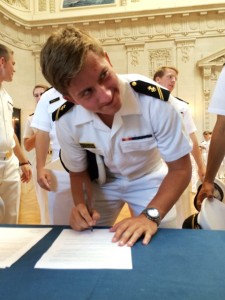 Alex Harris, LCCS Class of 2013, is currently a Midshipman 2nd Class (aka Junior) at the Naval Academy in Annapolis, MD. Alex signed his “2 for 7” on August 21, 2015. With two years of study behind him, the signing represents his commitment to complete his final two years at the Academy followed by an additional five years of service to the Navy. His major is aerospace engineering.

Since entering the Naval Academy, Alex has had many opportunities to travel and take part in some exciting assignments. His first summer consisted of one month on a destroyer rotation at Pearl Harbor in Hawaii. He was also part of the crew on a patrol boat that cruised up from Annapolis to Boston, and to Philadelphia. This summer, he spent two weeks in Germany and Switzerland to attend a Global Flight Test Symposium. He then spent three weeks in San Diego where he rode in the back seat of a Navy jet; the pilot performed some cool aerobatics. He also spent time on a submarine cruise.

Congratulations, Alex, and thank you for your service!