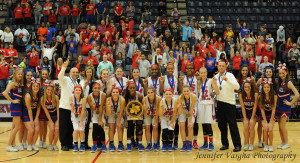 It was a milestone year for our Lady Eagles. Their 34-6 overall record included their 88th straight district win and their 8th undefeated district title. They finished the season as STATE CHAMPIONS! Many players also received TAPPS 3A District 2 All-District and All-State awards. Congratulations to all our Lady Eagles and coaches on a championship season!

TABC TAPPS 3A State Coach of the Year:
Steve Rachal