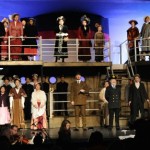 Congratulations to the LCCS Fine Arts team on the nomination! The 2016 DSM HS Musical Theatre Awards will be held on April 14, 2016 at Fair Park Music Hall in Dallas.